Your search for high end performance Hikari Scissors at an economical price is over! Hikari-USA has introduced their Etaro line and you can benefit.

Exciting Line of Scissors by Hikari

After many years of extensive research, innovation, and testing, Hikari Products USA has taken the unprecedented step of introducing an entirely new line of hairdressing scissors. The exciting new Etaro hairdressing scissors exhibit precision and quality far above their price range.

While there really is no replacement for Hikari scissors, undoubtedly the best scissors in the world, if you are unable to make an investment in a Hikari scissor right now, the Etaro Scissor is a viable consideration as you look for the balance between absolute best value and your budget. Etaro hairdressing scissors are the perfect choice for budget-conscious stylists, who won’t sacrifice on quality. The Etaro line consists of the following series:

All Etaro Scissors provides the sharp, smooth and effortless cutting of a Hikari Crafted Scissor at an amazing price! 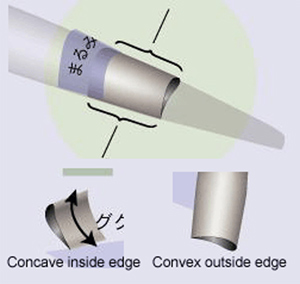 As with all Hikari Scissors, Etaro hairdressing scissors are made with the finest quality Japanese steel and tempered to Hikari stringent specifications. The initial BASE FOR Etaro hairdressing scissors is formed in China and then imported into the United States, where Hikari certified craftsmen shape and sharpen the blades creating the famous Hikari Precision Convex Edge. The blades are then balanced and polished to perfection. The result is the Hikari Crafted Scissor “melting through the hair feel” at an amazing price!

It’s no wonder Hikari makes the best hair cutting shears and now with the Etaro line there is a Hikari Crafted Scissor available for every budget. See all your options in the Etaro Scissors line and select your Hikari Scissors alternative today!

Join a conversation with us on:

Swivel shears give freedom of movement without changing your grip or position.

Texturizer removes approximately 20% of the hair and leaves absolutely no line of demarcation.

It doesn't get any easier than this. Fill out the form, agree to the data storage, and send it off. We can't wait to connect!